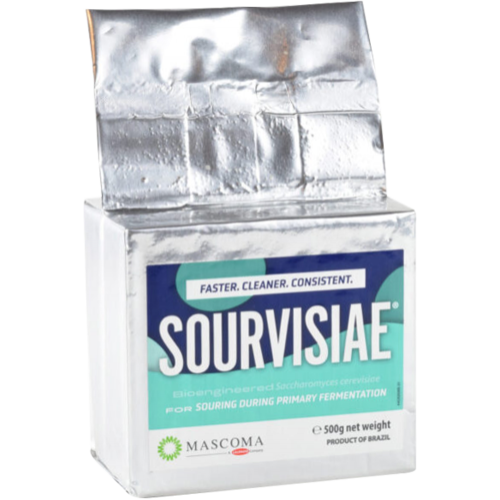 Sourvisiae® is a bioengineered ale yeast strain (Saccharomyces cerevisiae) capable of producing lactic acid during fermentation to provide brewers with an easy, reproducible, and mono-culture product for sour-style beer production.

Sourvisiae® contains a single genetic modification, a lactate dehydrogenase gene from a food microorganism, which enables the yeast to produce high levels of lactic acid, the main compound that gives sour beers their flavor. Sourvisiae® allows the brewer to ferment and sour the beer in one simple step, reducing cross-contamination risks, lowering costs, cutting total process time, and allowing brewers to obtain a consistent product. The brewing process is conducted without any modifications; Sourvisiae® is pitched just like conventional yeast and ferments in a normal fermentation time. Sourvisiae® does not produce other flavor compounds associated with Brettanomyces, Lachancea, or Lactic Acid Bacteria, providing a cleaner and more reproducible souring process, with much shorter fermentation times.

Microbiological Properties
Classified as a bioengineered Saccharomyces cerevisiae, a top-fermenting yeast. Finished product is released to the market only after passing a rigorous series of tests. *According to the ASBC and EBC methods of analysis.

Attenuation may appear lower due to the formation of lactic acid. Production of lactic acid does not result in a loss of CO2. When sugar is consumed to produce lactic acid, there is no change in density. Therefore, the amount of residual sugar in the finished beer is lower than the final density would imply.

This yeast produces a very acidic beer, with final beer pHs in the range of 3.0 and lactic acid in the range of 8 – 15g/L. Vigorous fermentation can be completed within 5 days.

The resulting flavor and aroma profile of the beer is a slightly fruity acidic beer. Because of the resulting low pH and highly acidic conditions, we do not recommend re-pitching this yeast.

NOTE: THIS PRODUCT IS ONLY ELIGIBLE FOR SHIPMENT IN THE UNITED STATES.